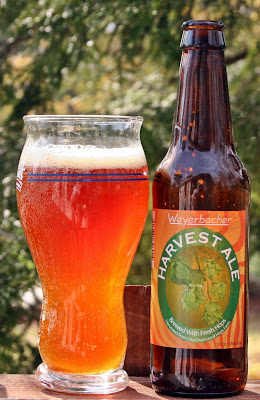 This is another beer from Weyerbacher I had high hopes for only to be let down. This one is their Harvest Ale which is supposed to be an IPA brewed using hops straight from their own farm however I am not getting any hop aroma or flavor from it. The only thing I can think is the bottle may be old but I could not find a bottled on or freshness date on the bottle.

Color is typical of a quality IPA with the nice orange color and thin white head. Lacing was good to start but has almost completely disappeared now. Of course I have been drinking the beer for 30+ minutes hoping it would improve as it warms. Aroma and taste are all malt with a very mild bitterness but no hop bite, no citrus or pine notes – drinks more like a red than IPA.

Really hoping this is just an old bottle as I was very disappointed with this option from Weyerbacher.
Pros:
Cons:
Alcohol Content: 6.2% ABV
Calories: ???
IBU (Bitterness): ??
Rating:

Brewers Website: Weyerbacher
Brewers Description: Harvest Ale is a 6.2% “wet-hop” IPA made from pale, munich, crystal, and wheat malts. It is hopped with a bounty of cascade hops straight from the brewery’s own farm! The bitterness is restrained to allow the fresh-hop aroma and flavor to shine through. 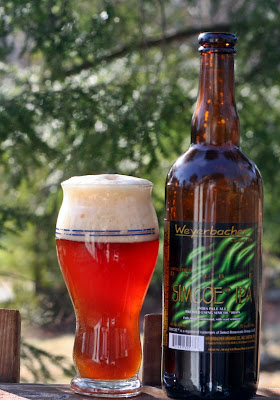 I had high hopes for this one as I like double IPAs and Weyerbacher makes some very good beer. The bottle is very nice with cork and wire cage and it took me quite some time to actually get the cork out of the bottle. Could not find any bottle on date so I have no idea if this was fresh or had been around for a while. The appearance of the beer is great; unfiltered, huge head and a deep orange color. Lots of aroma with malts and hops which was surprising.

I figured it would be all hops as many DIPAs are. Taste is lots of hops and alcohol with an oily mouth feel. I had hoped for something a bit more balanced that masked the alcohol better. I have reviewed a lot of double IPAs in the past few months and this one will end up near the bottom of the list.
Pros: Appearance
Cons: Oily mouth feel, strong alcohol taste
Alcohol Content: 9% ABV
Calories: ???
IBU (Bitterness): ??
Rating:

Brewers Website: Weyerbacher
Brewers Description: Double Simcoe IPA, 9.0% abv, is our incredible reward for Hopheads seeking the intense hop flavor in a Double IPA, without the harshness. It is brewed untilizing only the Simcoe hop variety. This hybrid hop, developed and trademarked by Select Botanicals Group, LLC in the year 2000, was created for its high alpha acid content, maximum aromatic oils, and low cohumulone(harshness) levels so that brewers can really put a lot of ‘em in a beer and not create an overly harsh taste.

Double Simcoe IPA is a full-flavored ale with hints of pineapple and citrus upfront, a good malt backbone in the middle, and a clean finish that doesn’t linger too long. Check it out, and you’ll soon see why everyone’s talking about it. Double Simcoe is available year-round. 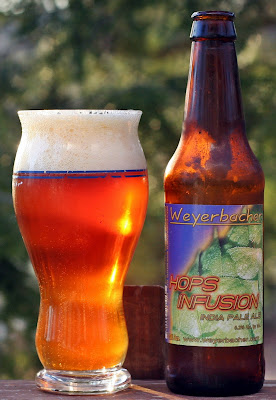 The score of this one may have suffered slightly as I had it immediately after the Victory Hop Wallop and it was just not as good. The appearance of this one was very promising with a nice deep orange color with thick white head. Smell had more sweet malts than hops which seemed odd since the name is Hops Infusion. This carries through to the taste as well with lots of sweetness up front with a lingering bitterness from the hops. Taste lasts and lasts but not necessarily in a good way. Overall this is not a bad IPA but after the run I have had of great double/imperial IPAs this one just did not stand up.
Pros: Appearance
Cons:  More malt aroma and flavor than I expected
Alcohol Content: 6.2% ABV
Calories: ???
IBU (Bitterness): ??
Rating:

Brewers Website: Weyerbacher
Brewers Description: Our brewers’ intention on Hops Infusion was to create a complexity of hops flavor and aromas, not found in any other beer. Made with seven hop varieties, this deep copper-orange IPA is loaded with juicy hop notes of pine, lemon zest, and a layer of pink grapefruit and a strong foundation of toasted caramel malts underneath it all give this beer a complexity that’s unparalleled. Hops Infusion weighs in at 6.2% and is available year-round.

In case you are wondering, the seven varieties are Cascade, Pilgrim, Centennial, Liberty, Saaz, Fuggle and E. Kent Golding. 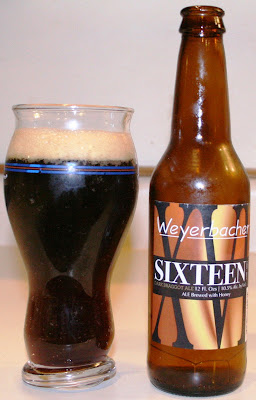 My wife brought home a 4-pack of this after shopping on Black Friday. At 10.5% alcohol I was expecting this one to have a fair amount of alcohol burn in the finish but it did not. Certainly warms the soul 🙂 but not overpowering. This is my first beer from Wererbacher but they brew a special for each year they are in business and this is their 16th anniversary edition. Pours a great dark brown almost black with solid head and good retention as you drink. Smell has a lot of sweetness from the honey used in the brewing process and the beer itself is also very sweet. Not sure I could drink more than one in an evening but I am glad I have 3 more for the week ahead.
Pros: Color, aroma, sweet taste
Cons:
Alcohol Content: 10.5% ABV
Calories: ???
IBU (Bitterness): ??
Rating:

Brewers Website: Weyerbacher Sixteen
Brewers Description: We’re super excited to have received a 2011 GOLD MEDAL at the Great American Beer Festival for SIXTEEN in the Specialty Honey Beer Category (GABF Category: 11) out of 32 entries! 2011 marks our sixteenth anniversary and what better way to celebrate than to make another very special beer?  Sixteen is a dark braggot made with 1,440 pounds of honey per 40BBL batch or over 18.5 oz. per gallon!!  That is truly ABSURD!  It is an impressive beer.  We say it for all of the Anniversary beers, but this one is going to be fun to cellar.  It will be really interesting to see how this beauty changes over time.  Here is some marketingese to get you salivating: Sixteen – Caramel, crystal, munich and chocolate malts form a rich foundation for this dark and complex ale. Brewed with an absurd amount of honey from Pennsylvania bees, this braggot has a profound honey character and a nice warming finish. It is the perfect beer to celebrate our sweet sixteen.