I had this beer after drinking the Backwoods Bastard and should have done them in the opposite order as Backwoods is the barrel aged version of Dirty Bastard. Because this one doesn’t have the bourbon character from the barrel I actually enjoyed it more than Backwoods.

Appearance is very similar, dark brown with a thin tan head that disappeared soon after it was poured. The aroma had a nice combination of sweet caramel and dark fruit. Tastes is similar but also has a nice hop finish which surprised me from a Scotch Ale. The 8.5% alcohol was well hidden.

Overall a tasty beer for a style that I do not drink often.
Pros:
Cons:
Alcohol Content: 8.5% ABV
Calories: ???
IBU (Bitterness): 50
Rating:

Brewers Website: Founders Brewing
Brewers Description: So good it’s almost wrong. Dark ruby in color and brewed with seven varieties of imported malts. Complex in finish, with hints of smoke and peat, paired with a malty richness and a right hook of hop power to give it the bad attitude that a beer named Dirty Bastard has to live up to. Ain’t for the wee lads.

I know there are plenty of people out there that will disagree with me on this review and they have every right to. I review beer by my personal preference and I generally do not like big bourbon tasting beers. Beer should taste like beer not bourbon so when I come across a boozy beer like this I sip it and try to enjoy the complex flavors but the booze is hard to ignore. The same goes for coffee flavored beer, I don’t like coffee so a beer that has big coffee notes is not going to do well by me.

This beer has a great dark color and a nice tan head that dissipates quickly. Aroma has plenty of bourbon and alcohol. The taste is complex with some dark fruits, vanilla and the bourbon finish that just overpowers everything else. This is a good example of a barrel aged beer but not something that I enjoyed or would buy again. Giving it 3 stars as it is a complex well made beer just not my style.
Pros: Complex
Cons: Bourbon overload
Alcohol Content: 10.2% ABV
Calories: ???
IBU (Bitterness): 50
Rating: 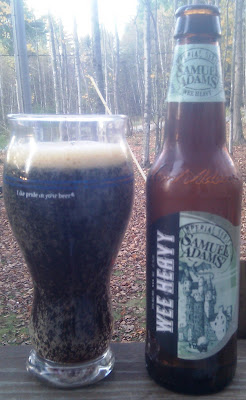 This is the last of the Samuel Adams Imperial Series – see previous reviews for the other 3. The Imperial Series has high alcohol content and is brewed to be an extreme version of normal brews. This one has a great dark color, solid head that leaves a nice lace on the glass. Aroma is minimal but has some chocolate and coffee smells. Overall a quality beer with quite a kick at 10% ABV.
Pros: Color, smooth considering the ABV
Cons: Not for the average beer drinker
Alcohol Content: 10.0% ABV
Calories: 348
IBU (Bitterness): 30
Rating:

Brewers Website: Samuel Adams
Brewers Description: Samuel Adams Wee Heavy was inspired by both traditional Scotch ales and Scotch whiskies, for a combination of deep roasted flavor and earthy smoke character. Traditional Scottish ales vary in intensity with the strong ales known as Scotch Ale or “Wee Heavy”. To create our own version of the style we added peat smoked malt to bring the unique flavor of Scotland to this complex and satisfying brew.
Scottish brewers have been renowned for their strong Scotch Ales for centuries. Their characteristic taste comes from the large amount of highly roasted malts to flavor and sweeten the beer rather than using brewing sugars or crystal malt. Barley is a signature ingredient of Scotland as used in their whiskies and its character comes through in their beers. By contrast, hops cannot survive the short Scottish growing season and are thus only used in limited amounts for these beers.