This is another beer from Paul given to me on my 40th birthday. Gilgamesh is an entirely new brewery for me, had not even heard of them before getting this beer but apparently someone at the brewery must like the show Fresh Prince of Bel Air as they have a couple beers with names relating to the show; this one, DJ Jazzy Hef and then a few others with movie references. Always interesting to see how breweries come up with the names for their beer.

Generally I am not impressed with wet hopped beers. It seems like a great idea, pick some hops from the bine, toss them into a beer and enjoy. Unfortunately the end result is not as hoppy as you would expect. Fresh Prince is described as a triple wet hopped double IPA so my expectations were high.

Great looking beer with a clear deep orange and off white head. Aroma was caramel malts and a bit of pine, overall pretty underwhelming for a double IPA. Taste moved away from the pine with a lot of flower and lemon zest. Finish had a fair amount of alcohol considering it is only 7.8% ABV.

Overall this is one of the better fresh hopped IPAs I have tried but still not a beer I would seek out again.
Pros:
Cons:
Alcohol Content: 7.8% ABV
IBU (Bitterness): 87
Rating:

Received this bottle as a gift at my 40th birthday party from Paul who travels to Oregon regularly as he works with Willamette Valley Hops. Breakside is located in Portland, Oregon and I believe this is the first beer I have tried from them.

India Golden Ale is a double IPA brewed with Eldorado. Mosaic and Chinook hops which makes for an interesting mix of aromas and flavor. Pour is a hazy deep copper color. Aroma has a solid amount of tropical fruit and is slightly sweet. The tropical fruits are all but gone from the taste which was a bit of a disappointment. They are replaced by a strong floral, piney flavor which was OK but not what I hoped for after the excellent aroma. Bitter on the frond end and the alcohol is well masked considering its 8.1% ABV.

I have no idea how old this bottle was when I got around to drinking it so it may have changed a bit from when it was brewed. If you find yourself in Oregon and see this on tap give a try as I don’t think you will be disappointed.
Pros:
Cons:
Alcohol Content: 8.1% ABV
IBU (Bitterness): 60
Rating:

My second beer from Hop Valley Brewing that I grabbed on a recent trip to Vermont. With a brewery name like Hop Valley you expect them to know how to use hops and make quality IPAs and DIPAs. First beer was their Citrus Mistress which I enjoyed and now moving on to their Imperial IPA which comes in at a solid 9% ABV.

Appearance is pretty typical of a big IPA with a nice orange color and solid off white head. The beer is crystal clear and you can see the tiny bubbles of carbonation floating to the top. The aroma was a little more subtle than I expected but there still is plenty of citrus and pine. Taste starts with a fair amount of bitterness then the citrus hops come in, finished with a slight taste of alcohol but not bad for a 9% beer.

Overall quite pleased with the first two offerings from Hop Valley and would love to go to the brewery and taste these beers super fresh.
Pros: Solid DIPA, minimal alcohol taste for the ABV
Cons:
Alcohol Content: 9.0% ABV
Calories: ???
IBU (Bitterness): 100
Rating:

First beer from Hop Valley Brewing and my second beer in a short time that includes grapefruit peel.  I bought this beer in Vermont as I don’t think it is distributed in Maine.

This is a very nice looking beer with a pale orange color and a thick white head. Aroma was a little more subdued than I expected from an IPA with grapefruit peel added, certainly less than the Stone Stochasticity Project beer. Taste was better than the aroma with a well balanced mix of citrus hops, grapefruit and sweet malts.

Overall I was happy with this beer even though it was not quite as good as Stone’s beer mentioned above.
Pros: Appearance
Cons:
Alcohol Content: 6.5% ABV
Calories: ???
IBU (Bitterness): 80
Rating:

Brewers Website: Hop Valley Brewing
Brewers Description: This seasonal IPA features 4 different hops with the addition of grapefruit peel for a citrus, peach and tropical bouquet plus enough munich malt to give it a classic burnt orange color.

This bottle had been kicking around my beer fridge for quite some time and I finally decided to open. I have no idea where I purchased it or how old it was but fortunately the beer held up quite well.

Chatoe Rogue First Growth is a series of beers from Rogue using ingredients grown on their farm. There are several others still available but this one was retired a while back. Beautiful deep red color with a tan head. Aroma has a mix of dark fruit and malt. Taste starts quite sweet and then turns a bit tart with the cherries. The cherry taste is not very prominent which makes this beer a lot more enjoyable than other super sweet cherry flavored beers I have had.

Overall this was an enjoyable beer from Rogue but not something I would seek out again.
Pros: Nice light cherry flavor
Cons:
Alcohol Content: 6.0% ABV
Calories: ???
IBU (Bitterness): 25
Rating:

Brewers Website: Rogue Ales
Brewers Description: We made this beer with our own hops and barley. Malty aroma, dark mahogany-brown in color with a rich, malty sweetness that finishes dry on top of a lush cherry flavor.

Got this beer from Matthew Rand in exchange for something, not even sure what it was but always love exchanging beer with others. It sat in the fridge longer than it should have being an IPA but still retained much of the flavor. Rogue generally does a nice job with their beer.

Color is your typical orange with an off white head, nothing too surprising here for an IPA but it does look nice. Nice mix of hop aroma with some pine, earth and citrus notes, not outstanding but solid nose. Taste is surprising smooth and easy to drink. Since it is named “Brutal IPA” I was expecting something big and harsh but that is not the case.

This is a solid IPA with a fairly low ABV which makes it pretty easy to drink. You should try it, I doubt you will be disappointed.
Pros: Better than average in all aspects
Cons:
Alcohol Content: 5.8% ABV
Calories: ???
IBU (Bitterness): 59
Rating:

I heard about the Rogue Dead Guy growlers earlier this year at a local beer store and was bummed that I missed the opportunity to buy one last fall. This year when they came in they notified me so I could come over and grab one. I believe it was $16.99 which is not bad for 64 oz of beer and the best part is they glow in the dark. Well not the entire growlers but the white parts; skeleton on the barrel, etc. Like most things that glow in the dark it has to be completely dark for it to work but I will try to get a picture and update this post.

The beer is just the normal Dead Guy Ale which happens to be excellent. The beer has a nice bright orange color with thin white head. Mostly malt in the nose with maybe just a bit of floral hops. Taste is a bit hoppier than the nose but still has more malt than anything. Also some fruit in there although I am not sure what I am tasting, maybe apricot? Finishes clean and very easy to drink. 64 ounces of this beer is not a bad thing.
Pros:  Very drinkable, balanced
Cons:
Alcohol Content: 6.5% ABV
Calories: ???
IBU (Bitterness): 30
Rating:

Brewers Website: Rogue
Brewers Description: In the early 1990s Dead Guy Ale was created as a private tap sticker to celebrate the Mayan Day of the Dead (November 1st, All Souls Day) for Casa U Betcha in Portland, Oregon. The Dead Guy design proved so popular with consumers and especially Grateful Dead fans, that we made it the label for our Maierbock ale. Even though the association with the Grateful Dead band is pure coincidence, we have gratefully dedicated Dead Guy Ale to the Rogue in each of us.

Sometimes you just need a simple refreshing beer. For me when it is really hot and humid or if I just finished a big double IPA or similar beer but still want another. That is usually when I look for a blonde ale.

This one from Widmer is about what you would expect from a blonde ale, light in color and body – simple but refreshing. Color is a nice pale yellow with a fairly thick white head. Aroma has some wheat and citrus. Taste has quite a bit of flavor for a summer blonde ale. Citrus hops, a bit of spice and a nice malt backbone. Overall a nice refreshing summer brew from Widmer.
Pros: Light refreshing and flavorful
Cons:
Alcohol Content: 4.3% ABV
Calories: ???
IBU (Bitterness): 20
Rating:

Brewers Website: Widmer Brothers
Brewers Description: Citra hops lend their name to this interpretation of a golden ale. But that’s not all they bring to the party.  Their striking citrus aroma and thirst-quenching flavor are the perfect pairing for the soft malt notes. Together they create a beer that’s full in flavor and uniquely refreshing. 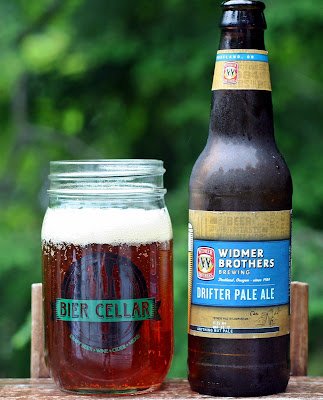 The Drifter Pale Ale from Widmer is a solid pale ale providing a nice balance of malts and hops. Color is a deep copper with slight white head. Aroma has a bit of malt and some nice hop smell. Nothing overpowering but certainly pleasant. Taste is much the same with some sweet malts that give way to grapefruit hops.

Very smooth and easy to drink. This is a great example of a pale ale and something most beer drinkers would enjoy.
Pros: Very well balanced and full of flavor
Cons:
Alcohol Content: 5.7% ABV
Calories: ???
IBU (Bitterness): 28
Rating:

Brewers Description: Kurt and Rob Widmer have never been known to “follow the leader”; their take on a pale ale is no different. With its unique citrus character, smooth drinkability,and distinctive combo of hops and malts, drifter pale ale is truly an original. 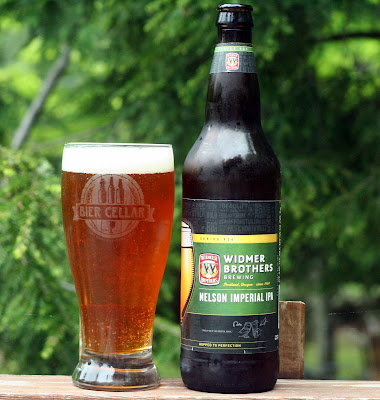 Picked this one up at RSVP a couple of weeks ago and was not sure where the name Nelson Imperial IPA came from. Assumed it was named after the brewer but in fact it is named after a variety of hop from New Zealand.

Beer pours a dark orange almost amber color with a nice white head. Lots of grapefruit and citrus aromas coming from this one. The taste is all hops to start but evened out nicely by the sweet malts Complex flavor which changes a bit as the beer warms. Easy to drink for the amount of alcohol in and leaves little to no aftertaste. Very well done.
Pros: Complex flavor
Cons:
Alcohol Content: 8.6% ABV
Calories: ???
IBU (Bitterness): 70Rating:

Brewers Website: Widmer Brothers
Brewers Description: Take your taste buds on a journey to the far side of the world. New Zealand’s legendary Nelson Sauvin hop gives us a powerful hoppy character, but none of the heaviness you sometimes find in imperials IPAs. The result is a big brew with a sweet, malty character that perfectly balances the intense hop aroma and flavor.