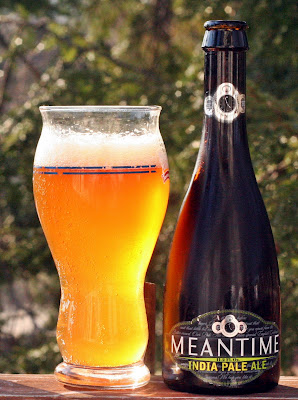 I have to admit I purchased this one because of the bottle. Such a cool design and label. This is an 11.2 oz bottle (slightly less than your typical American 12 oz) with avery unique style to it. Meantime is a brewery located in London, England and they also sell full 750 ml bottles with a cork top. The beer pours a pale orange color with a decent white head.  Smell is mostly malts and breads which is surprising for an IPA but maybe they do things differently in England. Taste has a fair amount of sweetness from the malts and a nice tropical fruit taste – maybe cantaloupe? Overall it was an easy to drink beer even at 7.4% ABV. Not sure I would seek out another bottle but I was not disappointed in the one I had.
Pros: Bottle
Cons: Average taste and less exciting than many American IPAs.
Alcohol Content: 7.4% ABV
Calories: ???
IBU (Bitterness): ??
Rating:

Brewers Website: Meantime Brewing
Brewers Description: The Original Bitter BeerA Glass Full of Hops
India Pale Ales are commonly associated with Burton-on-Trent as the town rose to international fame on the back of these pale beers because the gypsum-rich local water was ideally suited to making hoppy, pale beers. In fact the style originated in London, and between the 1780s and 1823 the East London firm of Hodgson had a jealously guarded virtual monopoly of supply to the growing India market. These beers were characterised by pale malts, long maturation, massive hopping levels and respectably high alcoholic strength. Meantime’s IPA is generally regarded (by all those whose opinion matters) as being the best available recreation of a nineteenth century IPA.

Our India Pale Ale may best be described as hop wine. Jam packed with English Fuggles and Goldings, the beer is brewed with as many hops as we can physically get into the copper. We even add more hops using our own unique circulation process to ensure maximum contact between the hops and the body of the beer. All this gives us a final hopping rate of well over 2lbs of hops per barrel, resulting in a beer which throws out ginger notes and flavours of, marzipan which soften into a rich Seville orange marmalade.

Excellent drunk now, even better drunk tomorrow; this is one for laying down – both you and the beer will benefit from it.

If you want to learn more about India Pale Ale visithttp://www.india-pale-ale.com

Food Pairings
This was the original ‘export’ ale and as the beer that the British drank when they invented curry, this, not lager – is the original,authentic and ideal partner to all great British dishes be they ploughman’s, roast beef, or curry.