My second beer from DuClaw. The first was their Anti Venom Citra which may have been infected based on how hard it was to pour. Neon Gypsy is DuClaw’s new IPA and it joins an impressive list of at least 50 different beers listed on their website.

Neon Gypsy pours a crystal clear orange with a thin white head. Not a lot happening with the aroma, mild citrus, pleasant but very light. Taste was better than the aroma with little pine and spice but I was hoping for more.

Not a bad beer but everything about it was mediocre.
Pros:
Cons:
Alcohol Content: 6.5% ABV
Calories: ???
IBU (Bitterness): 75
Rating:

Brewers Website: DuClaw Brewing
Brewers Description:It is medium-bodied and clear with a thin white head and crisp mouthfeel. A vagabond blend of 7 different hops dominates with grapefruit and citrus flavors and aromas, accented by notes of pine, that continue to roam your palate long after its clean, hoppy finish. Disconnect, and you will find your way.

I got this as part of a beer exchange with an attorney in Virginia that works in the beer business. He sent me a nice box of beer from the area and I sent a bunch of stuff from the Northeast. Unfortunately this beer was the low point of the box but all of the others were excellent.

This is a single hopped pale ale using Citra which should be right in my sweet spot but it wasn’t. I am not sure if the bottle was infected or just terribly over carbonated but pouring the beer was difficult and it left a huge head. Aroma was light possibly due to the too thick head, more malt than hops which surprised me.

Taste followed the nose with lots of malt and only a light citrus from the hops, was expecting a lot more from something named Anti Venom Citra. Overall this was not a bad beer and I may be too harsh since there is a possibility it was infected.
Pros:
Cons: Way over carbonated (infected?)
Alcohol Content: 5.6% ABV
Calories: ???
IBU (Bitterness): 45
Rating:

This beer was in the back of my beer fridge for months and I finally decided to open it. Being a small bottle I knew it would not be the only beer of the evening but it would be a good start.

This beer is a murky orange color with plenty of extra stuff floating in the bottle of the bottle, you can see some of that in the photo. Head is huge white with large bubbles and slowly dissipates into a thin trace around the top. Aroma has plenty of funk and a bit of spice.

Taste is solid for a saison but nothing very exciting, flavorful and easy to drink but there are better saisons out there. I enjoyed this beer but doubt I would go back for another bottle.
Pros:
Cons:
Alcohol Content: 6.0% ABV
Calories: ???
IBU (Bitterness): ??
Rating: 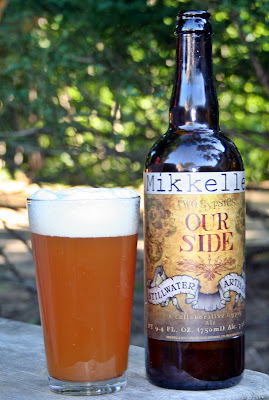 Somehow in the middle of all this Vermont beer I ended up sharing this bottle with my brother in law. The story behing this one is interesting (see brewer’s description below). Both Brian from Stillwater and Mikkel from Mikkeller are gypsy brewers. They do not have a brewery of their own and produce beer by visiting other breweries and doing collaborations. An interesting concept and it makes for some fun beers.

This one is a saison with a great cloudy orange color with a thick white head that left a 2 inch cap on the beer the entire time I was drinking it. Aroma is of spice and grass kind of a Belgian smell. Taste has a distinct yeast flavor to start with some hops in the middle but nothing that stands out and finishes a bit funky. This one seemed to improve as it warmed slightly so if you happen to pick up a bottle of this and don’t like it right out of the fridge give it a few minutes and come back to it, you might be surprised.
Pros: Appearance, head
Cons:
Alcohol Content: 7.5% ABV
Calories: ???
IBU (Bitterness): ??
Rating:

Brewers Website: Stillwater Ales
Brewers Description: Mikkel and Brian are two of the world’s most unconventional brewers. By designing beers at various breweries around the globe, they have found the freedom to experiment and innovate, resulting in unique beers that often blur the lines of definition. After having met at a festival in Bodegraven, NL the two realized that their first creations both were called Stateside. It was then an obvious decision to make the two recipes into a new product, packed full of piney, resinous hops, and backed by the esters of a farmhouse yeast strain. 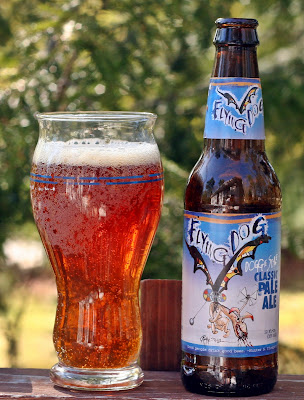 Grabbed a single of this the other night from one of our local pizza places. The artwork and names of the Flying Dog beers are entertaining by themselves and it is a good thing as this one did not have much else going for it.
Color is nice orange with a slight head that disappeared quickly leaving almost no lacing on the glass. Aroma was minimal but a bit of hops – nothing that is going to draw you in. Taste is bland, watered down and simply tastes like beer. Cannot pick out any characteristics of the malt, hops, etc. After I finished this off I went to the fridge and grabbed a Sebago Full Throttle Double IPA just so I could taste something worthwhile.
Pros: Easy to drink
Cons: Bland, watered down
Alcohol Content: 5.5% ABV
Calories: ???
IBU (Bitterness): 35
Rating: 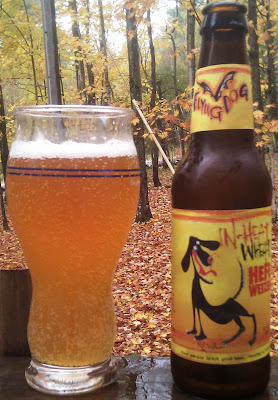 This beer has plenty of flavor and is different than anything I have reviewed to date. Color is great and pours with a nice head that dissipates quickly, cloudy finish found with most hefeweizens. Drink is smooth with very little bitterness and low alcohol content. The flavor to me seems a bit off and it may be the combination of banana and cloves that make this happen. Finishes clean and I believe it would be a good beer on a hot summer day. As you can tell from the photo I happened up this one on a rainy fall day. Not a bad beer but plenty of other options that are better including my favorite Hefe – Widmer Bros
Pros: Color, easy to drink
Cons: Banana / clove tastes are overpowering
Alcohol Content: 4.7% ABV
Calories: ???
IBU (Bitterness): 12
Rating: