For Christmas I finally got a Dogfish Head glass so I decided it was a good time to open some bottles that have been in the fridge for a while. This bottle is probably two years old. I have had it on tap a couple of times and while I enjoyed the beer it was not something I needed to open and review immediately.

Bitches Brew is an incredibly complex beer, brewers description includes the following “a fusion of three threads of imperial stout one thread of honey beer with gesho root.” Appearance is dark brown with a relatively thin tan head, what I would expect from an Imperial Stout. Aroma is sweet chocolate, coffee and something else I cannot identify. Taste has the same chocolate, only a very light hint of coffee (which is good as I do not enjoy coffee), dark fruits and a slight bitterness which seemed a bit odd. This beer changed quite a bit as it warmed so I would recommend opening and sipping it for at least an hour to get the full depth of aroma and flavor.

A very good beer that is worth picking up if you see it your local bottle shop.
Pros: Complex aroma and flavor
Cons:
Alcohol Content: 9.0% ABV
IBU (Bitterness): 38
Rating:

Brewers Website: Dogfish Head
Brewers Description: In honor of the 40th anniversary of the original release of Bitches Brew, Miles Davis’ 1970 paradigm-shifting landmark fusion breakthrough, we’ve created our own Bitches Brew — a dark beer that’s a fusion of three threads of imperial stout and one thread of honey beer with gesho root. It’s a gustatory analog to Miles’ masterpiece.

END_OF_DOCUMENT_TOKEN_TO_BE_REPLACED 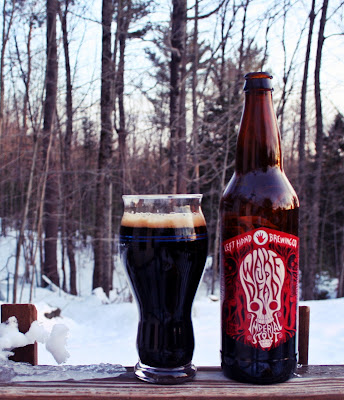 I am trying to work my way through the rest of my stouts before Spring finally comes to Maine. This is my first beer from Left Hand Brewing Company and it comes with a great name and label to match. Unfortunately everything else about this one is very average. Color is almost black with a one finger tan head typical of a stout. Aroma has some malts, coffee and dark fruit but nothing to great. The beer itself is full bodied but not very well balanced. Almost all malt and the alcohol comes through as well. Not surprising since it is 10%+ but I have had others in this range that did not have the same burn. No hops to speak of but a fair amount of sweetness. Overall this is not a bad stout but certainly not my favorite.
Pros: Bottle, name
Cons: Not balance, no hops
Alcohol Content: 10.2% ABV
Calories: ???
IBU (Bitterness): 45
Rating:

Brewers Website: Left Hand Brewing
Brewers Description: Here’s a black ale to brighten your day. Wake Up Dead lurks in our cellars for over 4 months before being unleashed. Hints of raisins, black licorice, coffee and dark chocolate are followed by earthy, herbal hop notes. Any apprehensions about the rest of your day are quickly forgotten, for whatever the mind expects, it finds. Sometimes you’re not in the mood for what everyone else is having.