Green Flash makes some interesting beers and Green Bullet certainly fits in with their many other IPAs. This one clocks in just above 10% ABV and is available in 4-packs of 12 ounce bottles or 22 ounce bombers. I purchased a single 12 ounce bottle and while I enjoyed the beer I’m not sure I would have wanted 4 of them.

Appearance is a very clear orange with a thin off white head. Aroma was not as big as I expected with plenty of pine and some citrus but also a lot of malt character coming through. Taste is fairly boozy with a big malt base and tons of pine. Leaves a film in your mouth as most really big IPAs do.

Overall this is not a bad beer but the hops are a bit one dimensional for me.
Pros:
Cons:
Alcohol Content: 10.1% ABV
Calories: ???
IBU (Bitterness): a lot
Rating:

Brewers Website: Green Flash
Brewers Description: Named after a super-robust New Zealand hop, Green Bullet™ is a well-balanced Triple IPA being bottled today for the 1st time ever. Brewmaster, Chuck Silva initially released this Pacific Gem to celebrate the Green Flash 9th Anniversary in 2011, and it was an immediate hit! Now, this cult favorite will be available from coast-to-coast as a seasonal release from September through December 2013. Be on the lookout for this high-caliber addition to our arsenal in 4-packs, 22oz bottles and on draft, because you do not want to miss the release. 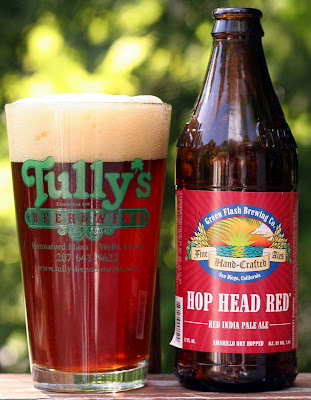 One of three Green Flash beers I purchased at Bier Cellar in recent weeks. Love the color and thick head on this one. Also leaves great lacing on the glass.

Certainly a bit darker than most IPAs but that is to be expected from a Red IPA. Aroma is middle of the road on this one, not overpowering but some hops, malts and a bit of fruitiness. Taste follows with plenty of hops and some sweetness to balance things out. Nothing too special but certainly enjoyable.
Pros: Well balanced
Cons:
Alcohol Content: 7.0% ABV
Calories: ???
IBU (Bitterness): 70
Rating: 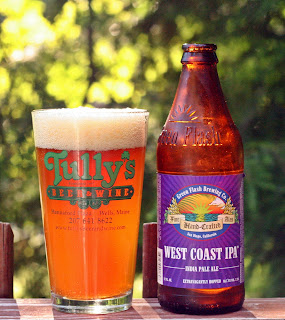 I’ve heard great things about Green Flash and their Imperial IPA (reviewed here) was an excellent double IPA so when they started to distribute to Maine I was excited to try more. I purchased a few different varieties from Bier Cellar last week and the other night decided to try the West Coast IPA.

Color is great with a thick white head. Really nice looking IPA. Smell is also very good with lots of different hops; floral, pine and citrus are all there. Taste starts, continues and finishes with hops. This is not a bad thing as I do enjoy hops but overall I think this beer would be better if it was a bit more balanced. 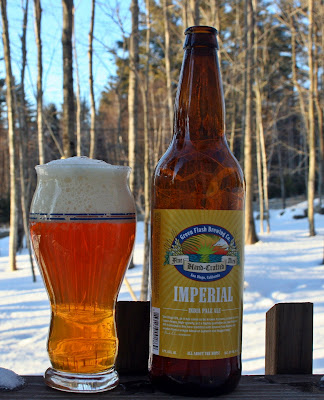 This one is very similar to the Alpha Dog IPA review #184. Only significant different is the size of the head as this one was huge. Smell is still has a lot of citrus and a bit of alcohol and taste is almost all hops. Malts are definitely overpowered by the massive hop presence. This one drinks very well for a 9.4% ABV Imperial. Went down smooth and tastes lingered well after the bottle was gone. Exactly what I would expect from a big West Coast IPA.
Pros: Hop taste and aromas
Cons:
Alcohol Content: 9.4% ABV
Calories: ???
IBU (Bitterness): 101
Rating:

Brewers Website: Green Flash Brewing
Brewers Description: San Diego IPA, as it has come to be known by many, is pale in color, super-hoppy, high-gravity, yet a highly quaffable ale. Our Imperial IPA is created in this new tradition with intense hop flavors and aromas from a unique blend of Summit and Nugget hops.