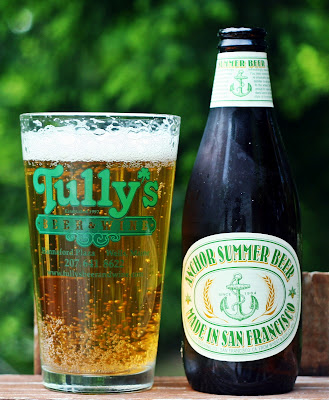 I have heard a lot about Anchor Brewing – specifically their Steam Beer so when I found their Summer and Steam at Tully’s in Wells I decided to buy both. I am hopeful the Steam Beer is better than the Summer as this did not impress.

Color is a pale yellow and very clear. Thin white head that leaves minimal lacing. Minimal aroma but a bit of cut grass. Taste was very simple, not bad but almost no lasting flavor and not something that you will remember. Finished this one fairly quickly with the low ABV but certainly not something I would go back for another.
Pros:
Cons: Very simple
Alcohol Content: 4.5% ABV
Calories: ???
IBU (Bitterness): ??
Rating:

Released each year in advance of the summer season, Anchor Summer ® Beer is an all-malt beer, with over 50% of its malt derived from malted wheat. It is fermented with a traditional top-fermenting “ale” yeast, yielding a clean, balanced flavor that highlights the refreshingly light flavor of malted wheat. The head is unusually abundant due to the natural protein deposits of wheat, with a thick consistency similar to meringue.