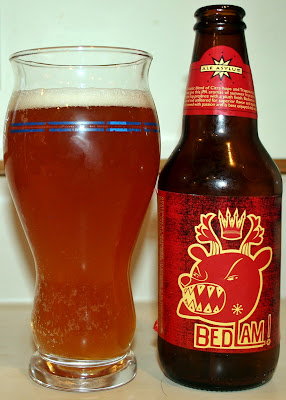 This is the fifth of 12 beers from the Wisconsin beer trade I received last week and I am really excited to try the rest of them. This one probably should get a higher rating but it was not quite as good as the Double Trouble reviewed earlier this week so 3.5 stars is what it gets. I really should change up my rating system but having already reviewed 170 beers it may be too late for that. Appearance is a nice deep orange (not as bright as Double Trouble) but has a similar aroma. Strong grapefruit and fresh hops. Taste is sweet but well balanced with plenty of fruits and hops which is what I would expect from a Belgian IPA. High ABV but that is masked well with all the flavor of the beer.
Pros: Aroma, taste
Cons:
Alcohol Content: 7.5% ABV
Calories: ???
IBU (Bitterness): ??
Rating:

Brewers Website: Ale Asylum
Brewers Description: An amalgamation of styles, Bedlam! was made on the condition that if our brewmaster (a style purist) didn’t like the first batch, it would go down the drain, never to see the light of day. Since that day, it has gone on to become our most popular seasonal. One beeradvocate.com member by the name of “Cokes” summed up the Bedlam! experience quite nicely:

T-minus 10…9…8…
The hazy golden-bronze ship shudders and emits a huge plume of soiled ivory smoke.
..7..6..5…
The exhaust cloud fills the surrounding area,only slowly receding, but leaving sticky lacing all around.
…4..3..2…
We have ignition. Lacing is still everywhere (and it will be for a while). We have launch.
…1…
Liftoff.

All systems go. It turbo-boosts into and across and through the mouthspace. The grapefruit and lime rind G-forces snap one’s head back right away. Once free of their gravity, a shortbread maltiness, with just a touch of toasted nuts pressurizes the cabin. Now it’s time for Ludicrous Speed. Kaleidoscopes of papayas, cloves, mangoes, allspice, pineapple, peppercorns, apples, mint, and orange race past as it speeds towards a black hole littered with bitter dry herbs and flowers. It’s throttled down a bit now, and frees itself from this pull, coasting in the sweetish tropical-spice medley, rather than navigating the coarser, more bitter sections of space ahead. The crew is divided: some say, nothing ventured, nothing gained; the rest are content with its smooth sailing.

The burly yet streamlined vessel is fueled by a persistent, bubbling carbonation. It flies through the ether as easily as it flies down one’s neck.

The course it’s on is fantastic, easy-going, sweet with balanced bitter moments. But there’s a salty deckhand insubordinate idea in my head: if had it strayed just a bit further towards that bitter black hole, it would have made everyone on board a legend.

But great results cannot be second-guessed, and this is, by all means and measures, an amazing trip.