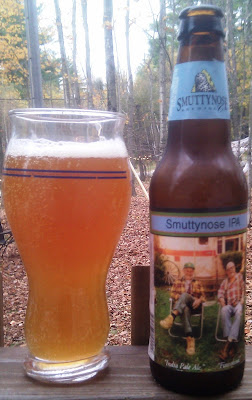 Smuttynose is quickly becoming one of my preferred brewers with every beer being in the top 2 for its style. Their Pumpkin is my favorite fall style, Brown ale was great and the Pale ale was solid while not my favorite Pale. This IPA is a perfect example of a pale ale with a solid amount of hops but the aftertaste does not linger too long. Color is great with a nice white head which lasts and leaves a great lacing on the glass. I cannot think of a better IPA and I am not usually impressed by IPAs.
Pros: Color, bite but not a lingering aftertaste
Cons:  Minimal aroma
Alcohol Content: 6.9% ABV
Calories: ???
IBU (Bitterness): 65
Rating:

Brewers Website: Smuttynose Brewery
Brewers Description: Portsmouth is a colonial era seaport town, so it goes to follow that sooner or later we’d brew an India Pale Ale as a tribute to those big, hoppy 19th century ales that made the long sea voyage from England’s temperate shores, ’round the Cape of Good Hope, to the sultry climes of the faraway East Indies.
But there’s another reason we brewed this beer, one that’s closer to our home and hearts. Hopheads.
Ten years ago we brewed our first batch of Shoals Pale Ale, our American interpretation of the traditional British ESB (Extra Special Bitter) style. At the time, it was widely considered to be darned hoppy. However, a funny thing happened over the last decade – our Shoals Pale Ale didn’t change; beer lovers did, and we started to hear more and more: “Why don’t you guys make a really hoppy beer?”
You could say, then, that Smuttynose IPA is a physical salute to the glory of the American hop grower. The citrusy hop flavor coming from a mixture of Simcoe and Santiams is pleasantly balanced by a smooth bitterness from the Amarillo hops. The beer itself is light bodied and crisp with a golden color that will throw a slight haze, as we bottle it unfiltered. At 65 IBU’s, this is definitely not a training-wheels IPA, but is meant for hop lovers looking to satisfy their craving in a way that’s not easy to find. We think they’ll be quite pleased.