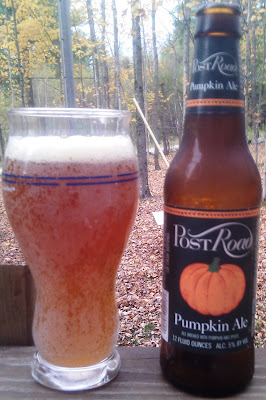 This will almost certainly be my last pumpkin/fall beer of the season as the Winter brews are starting to be released. This one tastes very similar to Shipyard’s Pumpkinhead ale which I enjoy. Maybe slightly less spice than Pumpkinhead but has similar  aroma and finish. Pours with a nice head and leaves lacing on the glass. This beer has just the right amount of carbonation and finished smooth. I find it hard to drink more than one pumpkin beer in a sitting but might have been able to do more of this one if I had not purchased just a single.
Pros: Taste, color, aroma
Cons:
Alcohol Content: 5% ABV
Calories: ???
IBU (Bitterness): ??
Rating: