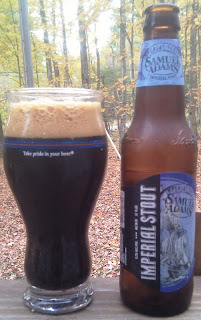 Took me 53 reviews to get to my first stout and now 2 in a row. This Imperial Stout from Sam Adams is entirely different from the Shipyard reviewed in #53. Pours to the same almost black color, nice thick head that thins quickly but remains to leave a nice lace on the glass as you drink. Taste is a slightly burnt chocolaty flavor which is better than the coffee flavor of the Shipyard Blue Fin. I cannot figure out what the aroma is but it is not terribly appealing. Sam Adams site says this would go well with Oysters or dessert, I don’t eat oysters so had to try it after dinner as a dessert and it worked well. High alcohol content and thickness make this a sipping beer. If you like stouts give this one a try.
Pros: Color, Alcohol content
Cons: Aroma (strange smell)
Alcohol Content: 9.2% ABV
Calories: 308
IBU (Bitterness): 42
Rating: