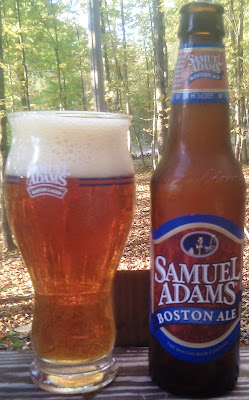 This one surprised me as I had never had a Boston Ale before getting a 6-pack for my birthday last week. It seems to be the “forgotten” Sam Adams brew as I have never seen this on tap and rarely see it in stores but it is a quality beer. Seems to be somewhere between a pale ale and a red, nice malt flavors and some sweetness from the caramels. Sam Adams got this one right and I will enjoy the remainder of this six pack soon.
Pros: Smooth, nice flavor, good aroma
Cons:
Alcohol Content: 5.4% ABV
Calories: 188
IBU (Bitterness): 34
Rating:

Brewers Website: Samuel Adams
Brewers Description: A smooth, refined version of a classic ale. Samuel Adams® Boston Ale was first brewed to celebrate the opening of our Boston Brewery. Like Samuel Adams Boston Lager®, it originated as an old family recipe rescued by Jim Koch from his father’s attic. Samuel Adams Boston Ale, a stock ale, has distinct earthy and spicy notes from the traditional English ale hops supported by sweet caramel malt notes. The ale yeast imparts a variety of fruit and ester notes while longer, cooler fermentation adds smoothness and complexity.
As a stock ale, Boston Ale has its roots in colonial New England.  One of the few styles to originate in the United States, stock ales began over a century ago when the beer was carefully aged in barrels in cool rooms called “stock cellars”.  Essentially this process creates an ale that’s been lagered so the taste tends to have characteristics of both. This technique imparted a smoothness and body which became the hallmark of this style.
Keeping with the stock ale style, Samuel Adams Boston Ale is fermented at warmer ale temperatures.  The beer is then krausened like Boston Lager and dry hopped at cold temperatures like a lager.  The English hops used in Boston Ale give it an earthy, spicy character that complements the sweetness from caramel malt.  The resulting beer is smoother than most ales and richer than most lagers with a round, robust taste.