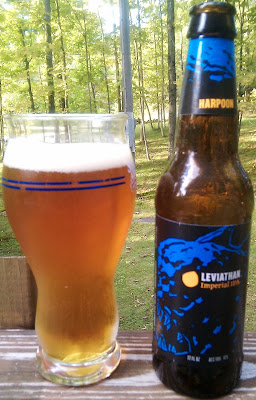 This is another solid beer from Harpoon. I was a bit skeptical as an IPA with a 120 IBU rating and 10% alcohol is not usually something I would enjoy but this one had a nice white head that stayed throughout the entire beer leaving a nice lace on the glass. The brewer does a nice job offsetting the bitter hops with some sweat malt flavoring. At 10% ABV you can taste it and it is a beer that should be enjoyed slowly.
Pros: Lots of hops but still not overpowering
Cons:  Strong (that could be a pro or a con depending)
Alcohol Content: 10%
Calories: ???
IBU (Bitterness): 120
Rating:

Brewers Website: Harpoon
Brewers Description: Harpoon Leviathan Imperial IPA will challenge your senses and your palate. As the vibrant aroma rushes out of your glass you will notice the blend of piney and tropical fruit notes.  At first sip, this big beer starts with a powerful hop bitterness up front and an aggressive hop flavor and character throughout.

Leviathan Imperial IPA is brewed with tons of pale malt and just enough caramel malt to provide a sweet malt body to balance the hop intensity. We used copious amounts of a variety of hops including Chinook, Centennial, Simcoe, and Amarillo at various points during the boil to create a complex hop flavor and clean lingering bitter finish. We then fermented the beer with Harpoon’s own versatile proprietary yeast.   Finally, we dry hopped at a rate of over 1 lb a barrel to produce this beer’s massive aroma.