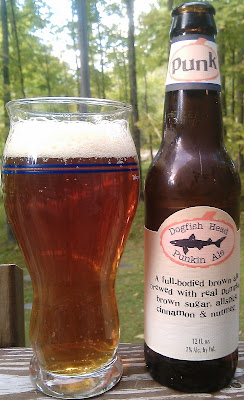 This one is like many of the other beers I have reviewed. A quality beer, something you will enjoy, would not refuse if offered, but not sure it would make you want to run out and buy more. Not nearly as good as the Smuttynose (review #38). Dogfish’s website describes this as a full-bodied brown ale but it certainly does not have the color of the previous brown ales, here. The first drink you can certainly taste the pumpkin but after that it gets lost in the other flavors. Color is what you would expect but nothing spectacular. It does have a good head when poured which lasts and leaves a nice lace on the glass. I like Dogfish Head and this  lives up to their usual standards.
Pros: Ample flavor, good flavor
Cons: Very similar to other pumpkin ales
Alcohol Content: 7.0% ABV
Calories: ???
IBU (Bitterness): 28
Rating:

Brewers Website: Dogfish Head
Brewers Description: A full-bodied brown ale with smooth hints of pumpkin and brown sugar. We brew our Punkin Ale with pumpkin meat, organic brown sugar and spices. This is the perfect beer to warm-up with, as the season cools.

Punkin Ale is named after a locally-famous and seriously off-centered event here in southern Delaware – Punkin Chunkin (check out some of these Discovery Channel videos of Punkin Chunkin, you gotta see it to believe it!). In fact, Punkin Ale made it’s debut as it claimed First Prize in the 1994 Punkin Chunkin Recipe Conest – yes, that was a full 6 months before we even opened our doors for business. Punkin Chunkin has grown in size and scale with pumpkins now being hurled more than 4,000 feet through the air! If you come down to see if for yourself – come by and visit us.
Since then, we’ve brewed Punkin Ale each and every fall. It is released right around September first each year. When you find it, grab some extra because it’s usually gone by Thanksgiving.
Food Pairing Recommendations:
Turkey, roasted duck, lamb, stuffing, dessert dumplings
Tasting Notes:
Malty, pumpkin, caramel, brown sugar