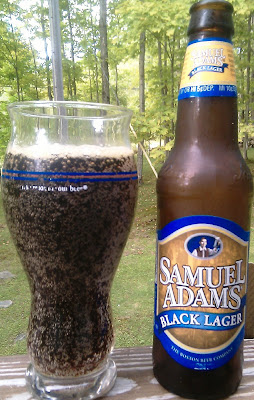 Most people think of dark beer as being heavy, thick and generally hard to drink. That would be true of most stouts but there are a lot of very dark lager and brown ales being brewed that are easy to drink, low alcohol content and generally smooth, even though they could be mistaken for your favorite cola in coloring. The Black Lager from Samuel Adams is a good example of a dark but smooth beer and I really enjoyed it. Not something I would drink every day but don’t be fooled by the color.
Pros: Great dark color
Cons:
Alcohol Content: 4.9%
Calories: 191
IBU (Bitterness): 19
Rating:

Brewers Website: Samuel Adams
Brewers Description: Our brewers’ interpretation of a traditional German schwarzbier.
When one sees a beer with a darker complexion these days, more often than not it’s a porter or a stout. But looks can be deceiving. There exists a style older than both and generally less well known; the schwarzbier, which literally translates to “Black Beer.” Unlike its dark cousins which are ales hailing from Britain, schwarzbier comes from Germany and uses a bottom fermenting lager yeast.  Samuel Adams Black Lager is brewed in the tradition of the latter. A medium bodied beer brewed using several different roasts of malt to create a smooth body and depth of malt character that has to be tasted to be believed.