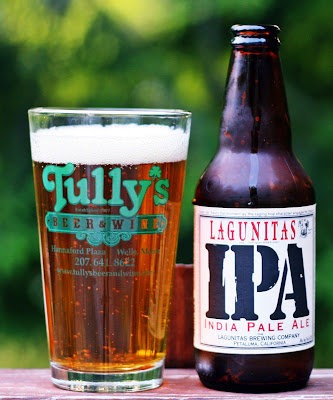 Lagunitas is new to Maine and I purchased this one at Bangor Wine & Cheese last week. I had heard good things about this beer but decided to start with only one rather than an entire 6-pack and I am glad I did.

This beer pours a super clear gold with slight white head. Aroma has a bit of everything with some floral, pine and citrus hops but nothing overpowering and nothing too special. Taste is fairly subdued compared to a lot of other IPAs with some hop presence but not nearly what you get from Maine Beer Company Lunch, and so many others. This was easy drinking and would compare well with some of the pale ales I have reviewed but not quite up to the standards of other big IPAs. Give it a try as you will not be disappointed but I don’t think you will find it to be anything special.
Pros: Smooth and well balanced
Cons: Closer to a pale than an IPA
Alcohol Content: 6.2% ABV
Calories: ???
IBU (Bitterness): ??
Rating:

Brewers Website: Lagunitas Brewing
Brewers Description: This is our unique version of an ancient style. A style as old as the ocean trade routes of the last centuries Great Ships. Not as old as the equator they had to cross twice enroute, nor as old as the 10,000 or so miles of Di-Hydrogen Oxide and Sodium upon which they sailed, but older than the Circulithium-4 Lentloid that binds the Lupulin Quartnate onto your taste buds. Weird. Think about it. Now stop. OK, go again, now stop. Think again, and stop. But we digress. Made with 43 different hops and 65 various malts, this redolent ale will likely float your boat, whatever planet you’re on.

Thanks for your trust, and as always:Think Globally, Drink Locally!!