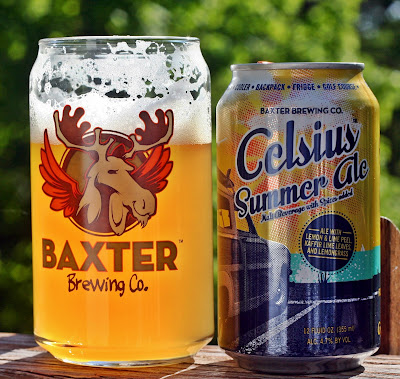 I was really looking forward to the fourth offering from Baxter Brewing and when they announced 6-packs of cans were available at the brewery I was the first one there. My office is less than a mile from the brewery so it was not difficult to get over to the brewery at lunch. Picked up a 6-pack, Baxter glass and a sticker for the truck. Stuck the beer in the fridge at work and patiently waited for 4:30 to come so I could go home and give it a try.
This is the first unfiltered offering from Baxter and I prefer unfiltered beer. It also is a summer beer with a low ABV and plenty of lemon flavor for those warm Maine summers. Beer pours a nice deep yellow with thick white head. The smell is where this one seems off. I could not quite figure out what the aroma was but it was not pleasant and not something you usually get from beer. With 235 other beers reviewed prior to this one I can honestly say I have never smelled something like this from a beer. I chatted with a few others that have had this beer and they all mentioned an unpleasant smell so it does not seem to be just me or the batch I had. (Read more)
Taste is pleasant with plenty of lemon and the beer is crisp as a good summer beer should be. It tastes even better as it warms slightly. Overall the beer is very good but the smell makes me not want another. Maybe if I drink it directly from the can I would not get the aromas I get after pouring in a glass. Have a few more in the fridge so may have to give that a try on the remainder of the six pack.
Pros:Taste, easy to drink
Cons: Unpleasant smell
Alcohol Content: 4.7% ABV
Calories: ???
IBU (Bitterness): ??
Rating:

Brewers Website: Baxter Brewing
Brewers Description: Our first unfiltered offering, Celsius Summer Ale is the perfect warm weather beer! Celsius Summer Ale is light and refreshing while still keeping your taste buds interested. The malt base features a hefty dose of wheat for a big, fluffy head and a soft, round body, yet keeps the beer drinkable even during the dog days. The light malt character is more than balanced by a blend of citrusy American hops, giving Celsius a crisp bitterness without being overpowering. The hoppy citrus aroma complements the ingredients that make this beer so unique: lemon and lime peel, Kaffir lime leaves, and lemongrass provide an subtle yet unmistakeable floral nose and just a touch of bracing tartness, taking the refreshment of Celsius to the next level.