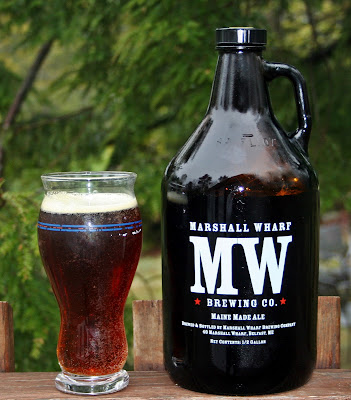 I tried a beer from Marshall Wharf a few weeks ago at Frontier in Brunswick and since then I have been trying to find a way to get to brewery for a growler. I had a meeting in Camden last week and took the extra few minutes to get to Belfast. Fortunately my timing was good and I caught someone in the brewery as they are not usually open on Wednesday. I decided to get a growler of Cant Dog Imperial IPA as I like big IPAs.
The growler is one of the nicest I have purchased with the logo on the front and an About the Brewery on the back. The beer was a bit disappointing. Actually I should be more specific the beer was not bad but it certainly did not look, smell or taste like a double IPA.
Color is very dark for an IPA and certainly not the normal bright orange you see in most. Aroma was minimal but had some sweet malts but almost no hop aroma which was a bit surprising. Taste followed with lots of malt, a fair amount of alcohol and a slight bite towards the end. Again no citrus, pine or floral tastes you typically get with IPAs. The first day I tried this I thought maybe something I ate was throwing off my palate so I tried again the next day and the next and it was the same.
Overall this was not a bad beer but I had to give it a fairly low rating as it does not compare well with the other double IPAs I have reviewed. Marshall Wharf will be canning their beers this summer and I look forward to trying more from them.
Pros: Strong
Cons: Lack of hops
Alcohol Content: 10% ABV
Calories: ???
IBU (Bitterness): ??
Rating: 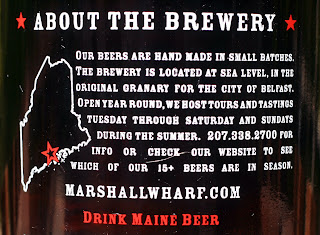 Brewers Description: This beer is the one beer that our brewers and I would take to that mythical deserted island if we could only bring one Marshall Wharf beer. Huge malt backbone matched with huge amounts of hops.