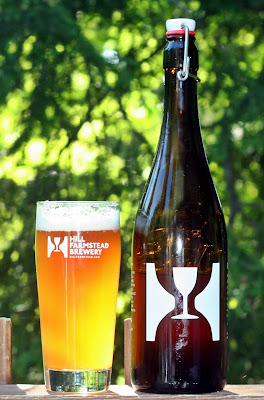 (Updated 7/10/2012) – Last week I took a 3-day trip to Vermont and the mini-vacation was mostly about beer. We ended up visiting 6 breweries including Hill Farmstead on the way home. I bought 4 – 750 ml bottles of Edward and it is just as good as I remember it. This is a great beer from a great brewer just too bad we cannot get it in Maine.

(Original Post 4/7/2012) After months of reading about Hill Farmstead and Alchemist Heady Topper I finally received a package of beer from Vermont. One of the insurance brokerages I work with is based in Vermont and some of their employees came to a conference in Portland Maine on Tuesday and we were able to work out an exchange of some beer only distributed in Maine for some local Vermont beers including this one from Hill Farmstead. This is a smaller growler than those sold by Oxbow and others I have reviewed but it is fresh beer poured from a tap, just the way I like it.

Color is a very nice orange with a very small white head. The aromas are plentiful with lots of citrus and pine hops, one of the best smelling beers I have had. At 85 IBUs this one is probably closer to an IPA than a pale ale but it really does not matter what style it is as this is a great beer.
Pros: Easy to drink, well balanced, hoppy
Cons: Hard to get outside Vermont
Alcohol Content: 5.2% ABV
Calories: ???
IBU (Bitterness): 85
Rating:

Brewers Website: Hill Farmstead
Brewers Description: Edward (1917-2002) is our grandfather; Hill Farmstead Brewery rests upon the land that was once home to him and his five children. In his honor, this American Pale Ale is dutifully crafted from American malted barley, a plethora of American hops, our ale yeast and water from Edward’s well. It is unfiltered, naturally carbonated, and dry hopped. Aromatic and flowery, with impressions of citrus and pine, this is the ale that I dream to have shared with Edward.