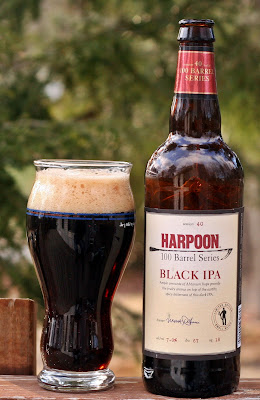 This is my fifth beer from Harpoon but the first from their 100 Barrel Series. This series is designed to give their brewers a bit more freedom with a little more freedom starting out on a pilot system and then moving it to a limited production. This is the 40th from the series but first for me. I do have #41 already and will review that in the coming weeks. Harpoon makes quality beer so I am sure I will continue to enjoy the 100 Barrel Series.

This one is the Black IPA which pours almost black, only slight hints of red in the color with a thick tan head. Aroma is minimal but there are some hops and roasted malts (as you would expect form a black IPA). Taste is good but nothing that makes it stand out from other run of the mill IPAs. Easy to drink with a fair amount of carbonation. Overall a good beer just not very exciting.
Pros: Appearance
Cons: Average taste
Alcohol Content: 7.0% ABV
Calories: ???
IBU (Bitterness): 67
Rating:

Brewers Website: Harpoon
Brewers Description: We have enjoyed brewing and drinking beers brewed in the IPA style for a long time. Our flagship Harpoon IPA and our Leviathan Imperial IPA are two of our favorites. We thought it was about time to take a crack at the Black IPA style.

Harpoon brewer Matt DeLuca took over the brewhouse for our 40th 100 Barrel Series offering. A newly released specialty malt from Briess called Midnight Wheat gives this beer an almost stout-like appearance without the overly roasty attributes often associated with traditional dark malts. Flaked barley is also used in the malt bill for head retention. An intense yet diverse hop addition schedule is executed during the boil that results in a well balanced offering.

On top of the Chinook, Simcoe, Cascade, and Citra hops is an ample addition of Ahtanum hops that provides a fruity aroma to complement the earthy, spicy bitterness of this dark ale.