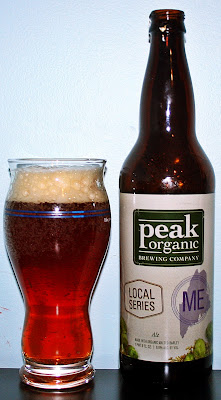 This is another first for me as I have yet to review anything from Peak Organic even though their beer is readily available in my area. Sometimes there are just too many choices, eventually I will get to more from Peak but this was a good start. When I opened and started drinking this one I was expecting an IPA, not sure why as it is described everywhere as an American Pale Ale so the taste seemed a bit off but it was simply my expectation. Appearance is a nice amber red with thick tan head and lots of big bubbles. Aroma has a bit of everything, citrus, malt and light hops but nothing overpowering. Flavor is about the same as the aroma, nothing that overpowers the other but I would have preferred a bit more hop. Overall a very drinkable beer that support Maine growers but not as good as Sebago’s Local Harvest. May try to find the other Local Series options for comparison.
Pros: Easy to drink
Cons: Light on the hops
Alcohol Content: 6.9% ABV
Calories: ???
IBU (Bitterness): 67
Rating:

Brewers Website: Peak Organic
Brewers Description: This series is a celebration of tasty local ingredients and distinctive terroir. We brewed four beers, each with barley and hops from one particular state (Maine, Vermont, Massachusetts and New York). Each beer in the series was brewed according to a similar recipe, to achieve an ale that is assertively-hopped and dry-hopped, but also bold in its malt character. Since the recipe is consistent, the flavor difference in each beer results from the distinctive local terroir. Working with skilled farmers to craft this series has been an exceptional experience for us. We hope you enjoy the result.